Eagle Rock You Like a Hurricane – Cindy’s Coffee Shop

So FYI – I’m not a breakfast person.

Now I’m not against eating a meal in the morning – breakfast IS the most important meal of the day. But I’m just meh about most breakfast foods. I never wake up and be like “Damn, I NEED some eggs!”

The matter of fact is, I do like going out to breakfast on occasion, but it’s either out of necessity or I want to be social. The social aspect of breakfast is the thing I like the most – I like sitting with someone, drinking some coffee, and talking. By necessity, it’s usually when I’m staying in a hotel or traveling. And even then – I would barely call it breakfast. I remember years ago when I would travel to Vegas with a (now) ex-boyfriend. He would sleep all day and I’m an early bird, so I would go out and do some shopping, play $5 Pai Gow, and eat breakfast. My go-to was the now-defunct Du-par’s at the Golden Gate Casino.

And guess what I would get?

So that brings me to Cindy’s in Eagle Rock. I was staying in Pasadena at a hotel for a couple of nights and I woke up and found myself kind of hungry. I decided that I would use that opportunity to hit a restaurant on my vintage restaurant list while I was out that way and settled on Cindy’s.

I got there super early and settled in at the counter. I’ll be honest – I wasn’t expecting much because…you know…breakfast food. But the bright orange vinyl booths and original vintage décor instantly made me feel at home and improved my meh mood.

I did notice that their weekend menu had “brunch” items and I was tempted, especially since they had things like shrimp and grits and gumbo. But I was going to a concert that night and didn’t want to tempt poop fate, so I just ordered my usual basic bitch breakfast – eggs, sausage, potatoes, and sourdough toast.

I gotta say, it was pretty good. The sausage patties were homemade and actually tasted like something – spicy and meaty and not just pure crusty grease. The potatoes were red potatoes and they smashed them and refried them a little, which I LOVE. Overall, it was really delicious for breakfast and I was surprisingly impressed. I even took back a ginormous piece of cake (I think it was some kind of bourbon-butterscotch-carrot cake hybrid) and a pair of their nifty socks (socks and shirts are available for purchase). They came in a couple of different colors, but I picked these because they look very Naugles-y.

And guess what? I went back. I’ve been back multiple times for breakfast and I love it. Below are two more delicious breakfast dishes I’ve had at Cindy’s – one is a Mexican breakfast plate with HOMEMADE FUCKING CHORIZO, jalapeno cream, and homemade tortilla. The other is french toast with bourbon bananas on the side. The french toast was PERFECT – I normally hate thick slices of french toast because it never soaks/cooks all the way through. 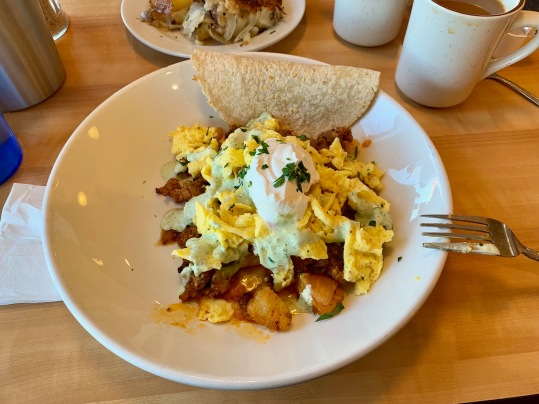 Really – every bite I take of their breakfast, my eyes roll back and I say “OMG this is so good!”

And this is coming from a breakfast hater! 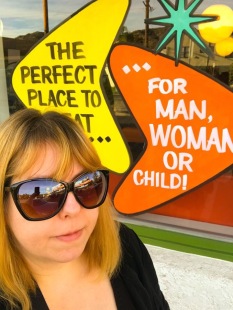 But how is their non-breakfast food?

Well, I don’t know. I’ve only been there for breakfast. Cindy’s is open for breakfast and lunch and their sister restaurant in Altadena, Fox’s, is only open for dinner. But if their breakfast is any indication, their lunch and dinner must be phenomenal. Fox’s has been on my list to hit up for a long time, so I’m thinking I’ll be eating there soon.

Cons: The only cons I can think of is:

Other than that, Cindy’s in Eagle Rock is perfect and deserves the five cold butter pats I’m giving it.